The Center for People With Disabilities

CPWD is an equal opportunity employer/program. Auxiliary aids and services are available upon request to individuals with disabilities.

Prior to the last month, opportunities to work out with a trainer, take walks with a companion and interact socially with people other than his relatives were too infrequent for Korean War veteran and Lafayette resident Stuart Rubine.

But since he enrolled in a new program with the Colorado-based Center for People with Disabilities offered in partnership with the U.S. Department of Veteran’s Affairs, Rubine has been occupied more often — and his family members have more peace of mind, too.

Recognizing that relatives of veterans with disabilities who provide full-time care and supervision for them can become exhausted by the constant demand of such tasks, the nonprofit Center for People with 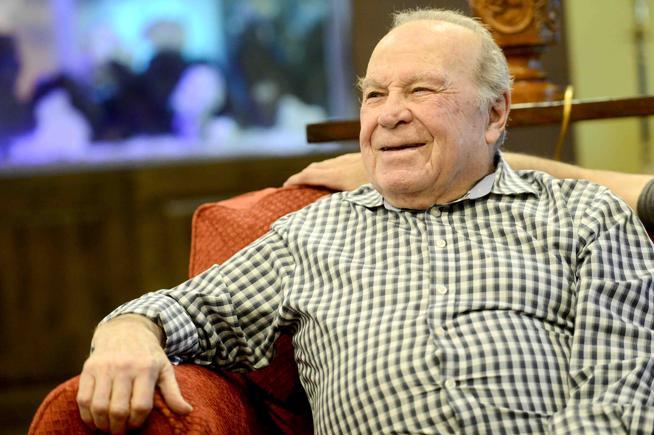 Disabilities applied with the VA for certification to connect veterans with in-home caregiving and other services to those able to live independently.

The center just more than a month ago started offering VA-funded benefits to eligible veterans with disabilities who can stay in their own residences to help pay for the cost of in-home care.

Rubine, who served in the Army, is the first — and so far only — veteran in Boulder County to receive funding through the Center for People with Disabilities’ new Veterans Independence Program established with the VA approval.

Instead of moving to a full-on nursing home when his dementia — which his son said is related to a head injury he suffered in the Korean conflict — became concerning several years ago, Rubine has been able to remain living with his wife of 61 years, Virginia, at Balfour Senior Living in Lafayette, where the couple maintains full control of how they spend their days.

Stuart Rubine speaks gratefully of his wife’s friendship and daily assistance over the years, and has gained newfound enjoyment in continuing strength exercises with a trainer three times a week whose time is paid for by money secured for the family through the Center for People with Disabilities program.

“My wife is delicious. She’s around and (is) a lovely woman,” he said.

Rubine’s enrollment in the program has also relieved his son, David Rubine, and his wife from having to care for the veteran in addition to both their busy full-time work schedules.

“My mom is burning out, and I work full time, my wife works full time. He’s incredibly strong. Now, we can pay for a trainer to take him out and do weightlifting and go for walks and give my mom a break. He gets workout stimulation, we get respite,” said David, adding that his mom can go for swims when her husband is busy.

Stuart Rubine can still play the guitar fluidly, his son said, and has had a lifelong penchant for physical activity that carried through his career as a high school teacher and football, wrestling and baseball coach in San Diego.

Losing the freedom to engage in such pastimes often accompanies moving to a full-time nursing facility at a detriment to the individual, according to Center for People with Disabilities Executive Director Maria Stepanyan.

“The model and philosophy of the program is such that it gives the veteran the decision-making power over care. Oftentimes you lose that independence and power to make your own decisions (in a nursing home),” she said.

Chris O’Brien, the nonprofit’s director of development, added there is a risk of people becoming depressed and neglecting to eat when they are moved into a nursing home.

“The VA is primarily focused on what they call functional assessment, so they want to evaluate the physical and psychological well-being of the veteran and address that medically. They don’t have the capacity or programming to help veterans find a way to remain independent in their own home in the community. The priority at some point would be to put them in a home where they would have 24/7 care from a nursing staff,” O’Brien said. “It’s a little bit of an irony since the role of veterans is to preserve our independence.”

The Center for People with Disabilities said it estimates 1,800 veterans of the approximately 15,000 in Boulder County have a disability and may be eligible to receive benefits through its Veterans Independence Program.

Veterans must first be qualified to enter the program through the Denver VA hospital.

Once given the go-ahead to receive funding, Boulder County veterans can get assistance managing their budgets and the logistics of coordinating apt in-home care services from the Center for People with Disabilities staff.

“I’m not putting down nursing homes, but for people who want to live independently, it’s a formidable hurdle to take care of all the necessary tasks and arrangements, including benefits, care providers, finding a place to live. CPWD’s Veterans Independence Program helps navigate that maze,” O’Brien said. “We’re not a medical agency just doling out services. Peer support is a huge element as well. Acquired disabilities such as service-related injuries or PTSD need more than medical attention — they need human attention, peer support, encouragement.”

Celebrating Memorial Day for Rubine will consist of a lunch with family members.

“As often as we can, we try to talk about the memories of what he’s contributed and sometimes he’ll remember spot-on certain events. Mostly he’s a good-natured guy and we try to appreciate that every day of the year,” David Rubine said.